I had taken an overnight Volvo bus from Mumbai to Mangalore. After freshening up at friends place in Mangalore, we headed to the hills just around 2 hours from Mangalore. Driving down from the coastal town of Mangalore via Charmadi Ghats, between the clouds, hairpin curves. The visibility of road was poor and high beam light was a necessity even at early afternoon. The Ghats were filled with waterfalls and streams everywhere. 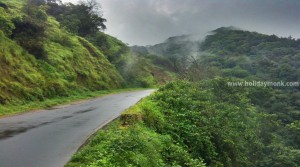 After crossing the Ghats, we stayed at a tea plantation bungalow run by a family friend in Mudigere, Chikmagalur district. We had sumptuous Lunch and took a nap for 45 Min. Weather was cold and misty. 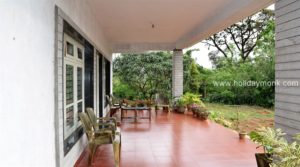 After the nap, we headed towards nearby Ballarayanadurga Fort where we could see the mighty Western Ghats covered in mist all over. There were cliffs, bids eye points all over. As per locals, there lived a brave local chieftain called Ballaraya who fought vigorously with Hyder Ali’s invading army. The chieftain and 500-600 soldiers on either side die during the battle. The queen commits suicide by jumping of the cliff from her horse. Ballarayanadurga Fort is overlooking Kudremukh mountain range and is covered with Shola forest. 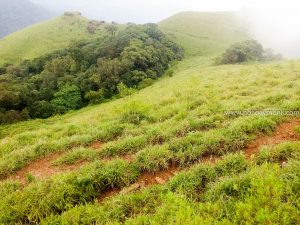 Ballarayanadurga Fort is overlooking Kudremukh mountain range and is covered with shola forest. We went on a trek to Bandaje Abbi waterfalls. We could spot a few wild bison on the way. 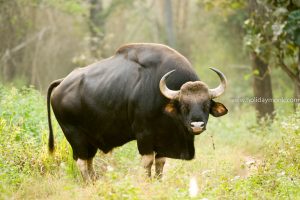 We had made preparations for the trek and also the leaches. We had applied Tobacco with some lime to our legs. Still we were bitten by leaches. 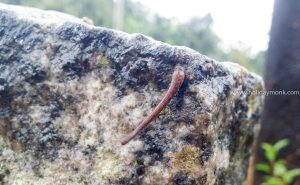 We trekked through Shola grasslands until we could reach Bandaje Abbi waterfalls, Water was pristine and we could not feel the cold after a long trek. We spent 45 min near water falls. 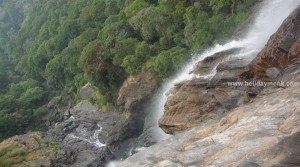 In the evening after visit to the fort and falls, my friend and I opened a bottle of old monk rum. We had rum with pork, cooked in traditional Malenadu style and fish. Rum and bonfire made us forget the cold chilly night and sore leg after trekking. We discussed about Ballarayanadurga visit, the chieftain and his fight against invading Hyder Ali’s army and also the temple of Kalabhairava near the fort. Locals fear and believe there is great energy in this Shiva temple. We discussed a lot on Malenadu history and Hoysalas legacy, British growing tea in Malnad etc, over glass of rum. Also we discussed how Malenadu people lived during 5 months of continuous rains without even seeing the sun.

Next day we go up at 7 am, freshened up and had some traditional filter coffee grown in the estate and headed towards Tea factory. The manager took us around the tea plantation and explained to us the tea plantation maintenance, labour, irrigation etc. Then we visited the tea factory were different grades of tea were shown

We had a great breakfast with a spread of local food like Kadabu, Akki rotti, Shavige and Kai saru.

After breakfast we headed to River rafting in Bhadra, River rafting was serious fun with 8 rapids and the peak monsoon rains have soared the river to its full glory.